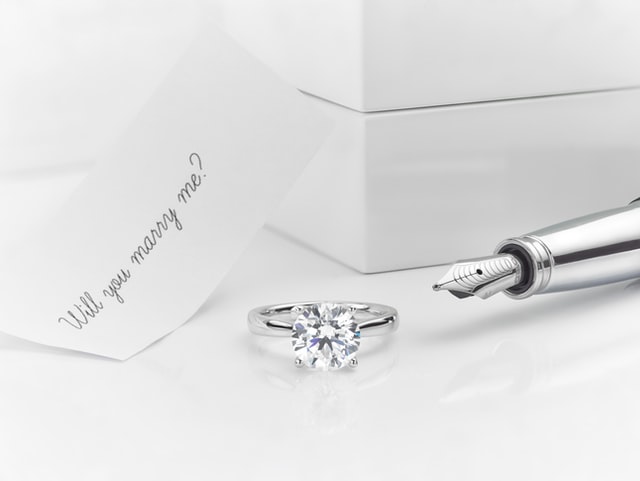 Bring on the Band

Although these metals both achieve a similar coloration at first glance, the subtle differences in appearance are a result of drastically different composition. Most platinum on the market is almost pure, ranging from 95% to 98% with a small percentage of other metal alloys. The natural color of platinum is a silvery white, slightly lighter than but comparable to 14K white gold. Although there is a subtle difference in shine, most people would say that they look almost identical at first glance. 14K white gold is actually only 58.3% gold, mixed with varied proportions of nickel, copper and mostly silver to give it more strength as well as a lighter coloration (see our blog on karats vs carats to better understand the differences between 10K, 14K, 18K white gold). Since 14K white gold has a high percentage of gold, which is naturally yellow in coloration, it has a tendency to revert back to a warmer hue over time. It will get darker, sometimes to the point where you can see a yellow tint to it. Many white gold rings have an additional plating of rhodium to make them look even lighter and shinier. However, even this type of plating will come off over time. Rhodium plating has to be re-applied yearly or every few years depending on its thickness. Conversely, platinum stays white since that’s its natural color. These subtle differences might make a big impact when choosing between the two.

Platinum is much stronger than any gold alloy. It’s so strong that it’s actually incredibly difficult to cut through in case of emergency! The rhodium plating added to white gold actually makes it much stronger than yellow gold, though still not as strong as platinum. This not only means the band itself will hold up better to abuse, but also means that platinum is much less likely to bend, making it much more difficult for stones to come loose or lost.

Most people set a budget when looking for a diamond engagement ring. Whether you’re looking to buy one that’s already made or you’re looking to design a custom engagement ring, the platinum option will always be more expensive. There are two very straight forward reasons. First of all, there is less platinum in the world, therefore it’s harder to find. This limit in supply makes it a more expensive mineral compared to gold to begin with. Secondly, platinum is actually heavier than gold. This means that if you were to have the same size, shape and thickness of both a white gold band and platinum band, the platinum would be heavier. So there is actually more platinum used to create the same sized band. Consequently, the price will be higher because you are using more material and the material is more expensive.

Platinum is more durable, naturally lighter in color, and mixed with less alloys allows – thus ‘purer’, which may have a symbolic meaning to some people. This purity also makes it more hypoallergenic than gold! White gold is lighter for people who don’t like a heavy ring, but the rhodium plating has to be reapplied periodically, though this plating makes it stronger while also removing contact with the allergenic alloys to the skin. The rhodium plating of most white gold bands means it will be more maintenance in the long run, but much cheaper and slightly shinier.

Should  You Choose Platinum or White Gold for Your Engagement Ring?

White gold tends to have rhodium plating that fades over time, but is generally cheaper and less durable than platinum. For example, platinum prongs holding the center stone of your engagement ring are less likely to break than white gold ones.

A Timeless Question: How Much Should You Pay for an Engagement Ring?

Tips for Picking Your Engagement Ring in Montreal

Understanding Diamonds – What Are The 4 C’s Of Diamonds?